After an early start, our group of twelve met at half past nine in the car park of the Shepperton Whitewater Canoe Centre. Half the group travelled there by train and on foot from Waterloo, the others by car. Many of the canoeists had the goal of practicing skills in preparation of upcoming open-boat assessments. Canadian-style canoes were either brought by car (Lucy and Toby) or hired from the centre (Tom, Cai, Sven, Ian, Marco and Matt). Chris brought his own kayak, whilst Stephanie, Richard and Helen hired Venture Flex kayaks. 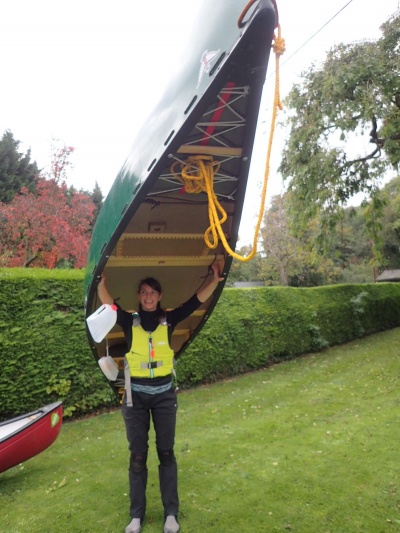 Have boat, will travel

We set off on the water in glorious sunshine around 10am, and after navigating our way out of Shepperton marina, headed west onto the main body of the Thames. Shortly afterwards took the right-side of the fork at Desborough Island, following the meandering river past suburban homes looking out over the river. On this stretch we also passed by Desborough Sailing Club and a high-security fortress, also known as Shepperton Manor, former home to a Victorian shipping magnate. Following two bends in the river, we reached a confluence and D’Oyly Carte Island, home to the mysterious and dilapidated Eyot House. We also spotted some wildlife on the river bank, including some herons and swans. 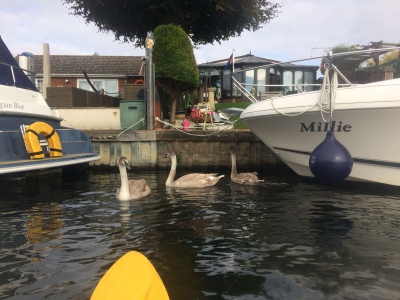 It was only a short paddle onwards to Shepperton Lock. Chris showed us the best spot and means of navigating the lock. We took it in turns to climb out onto the river bank beside the lock, before hauling our boats onto the bank beside us. Working in pairs we carried our boats around the side of the lock, before launching back into the water for the short hop across the river to the Thames Court pub. Arriving at the pub just before 1pm, we enjoyed a tasty pub lunch and pint outdoors, before setting back onto the river at 2pm under cloudier skies. 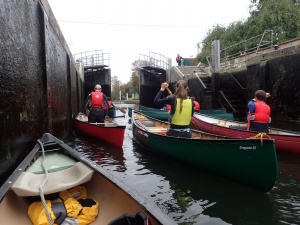 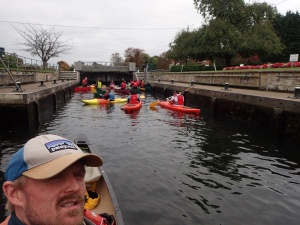 Lock away - there's nothing to see here! 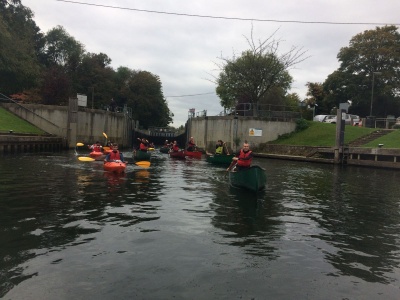 On our journey eastwards the lock keeper kindly let us go through the lock on our boats, for many in the group it was their first time in a lock. Past the lock we took the much shorter route along the south-side of Desborough Island. This shortcut enabled us to arrive back at the water centre around 3:30pm. 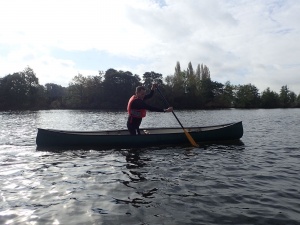 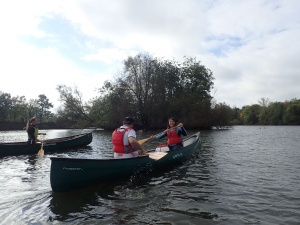 I think we're supposed to face the same direction..

Among the less experienced, the three in hired kayaks swapped places with some of the canoeists on the homeward stretch, so everyone got some practice in canoes. Having an hour to spare some of the novice canoeists took the opportunity to practice skills such as the bow rudder and turns, both solo and in tandem boats. Chris also taught us some different canoe rescues, including the curl and X rescue, and Lucy gave us some useful advice for breaking the seal on the water where the boat is too difficult to lift. 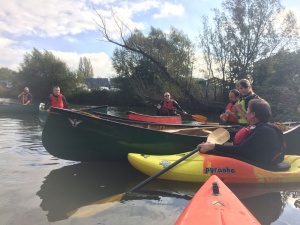 A meeting of minds

The more experienced in the group also got to learn new skills, with Lucy hoisting a colourful sail on her canoe for the first time on the homestretch. 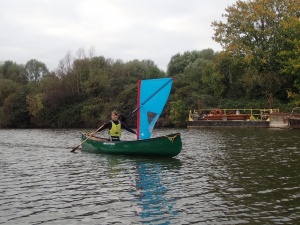 After getting off the water at 4:30pm, we loaded the boats and took advantage of the shop discount before heading off home. 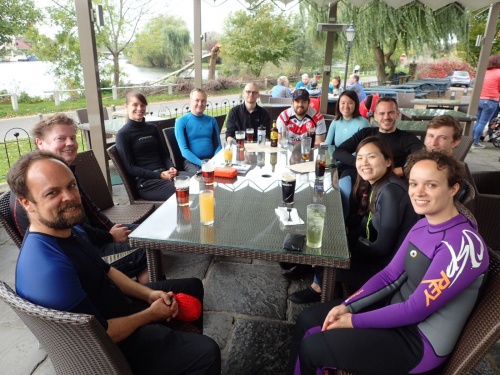