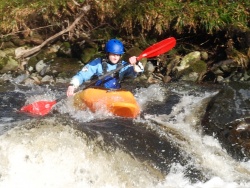 This trip was aimed at paddlers who already had some experience of paddling on moving water. Five of us, with a couple of white water trips under our belts, signed up and were joined by a couple of coaches and four other experienced paddlers.

We travelled down on the Friday night and stayed at the Drewe Arms in Drewsteignton. The pub was very welcoming and due to our inability to comprehend the meaning of last orders, they kept calling it until we finally understood, by which time it was well past midnight. Stables converted into bunkhouses provided comfortable accommodation at £15 per head. Some outside drying space was available but nothing indoors.

The experienced paddlers and our coaches disappeared on Saturday morning to entertain themselves on the Upper Dart, leaving us instructions to meet them at Newbridge, which we eventually did via a little chef and much sat-nav faffing.

A well known mark in the kayaking world, but not in the world of sat-navs, Newbridge is just a bridge and a car park, nothing else, and several showed up on our sat-nav which even suggested one 500 miles north. We were not to be completely fooled and eventually found it here

Details of the Grade 2 listed medieval Newbridge can be found in Wikipedia;the entry acknowledges the role of the BCU in maintaining the spot for our benefits.

The river level was low, introducing new challenges to many of us with constant scraping and bouncing off of rocks just below the surface and difficulty in changing direction with so little water underneath your blade. Some capsizes occurred as boats got pinned against rocks but with water not deep enough to go right over we just got out and walked away.

We practised assessing the upcoming features and working out the best lines as we paddled through a mix of wave trains, rapids and small drops. The UK rivers guide to the Dart Loop is a comprehensive guide to this stretch of water.

The following day it was decided to paddle the same stretch of water due to the low water levels across the region. Building on our experience of paddling the course the previous day, the coaches showed us some basic leadership techniques including how to collectively eddy hop through a stretch of water. They then sat back and let us get on with the trip, taking turns amongst ourselves to lead and take the group through the various features. It was a great introduction to group leading and something we can all build on, on future trips.

A big thanks from all involved goes to the coaches Paul Y and Steve B who pushed us and taught us well and even provided the entertainment when one got stuck in a stopper and the other sat there laughing his head off.

More pictures of the trip can be seen here