From THCCwiki
Revision as of 16:32, 5 September 2017 by Shep (talk | contribs) (Created page with "As the new winter season starts, we had a smaller group for this September trip up to North Wales. Phil, Alison, Lou, Steve, Martine and Shep headed up to the lovely Vagabon...")
(diff) ← Older revision | Latest revision (diff) | Newer revision → (diff)
Jump to navigation Jump to search

As the new winter season starts, we had a smaller group for this September trip up to North Wales. Phil, Alison, Lou, Steve, Martine and Shep headed up to the lovely Vagabond Bunkhouse on Fri 1st in Betwy-y-Coed meeting Bruce the gorgeous chocolate lab in the bunkhouse's own managed bar for a few quick pints and quite a tame evening compared to other previous WW trips!

Saturday weather was warm and sunny, so after a full cooked breakfast provided by the bunkhouse, deffo wetsuit/boardies & cag weather as we headed over to the white water centre at the Tryweryn, near Bala. Being a small group the shuttles were effortless. Steve and Phil got in a cheeky run of the Upper as Lou and Alison sorted out the Lower shuttle and reported that the "T" was running at 12 cumecs (normally at 9). After a couple of silly swims (during warming up, mind!) Shep was thoroughly wet and practicing screw, polata and offside rolls. No issues as we ran all the features of the Lower - even Phil's nemesis (the Boulder Garden) wasn't able to defeat him tis time! And we spotted this Mermaid at Bala Mill Falls!! 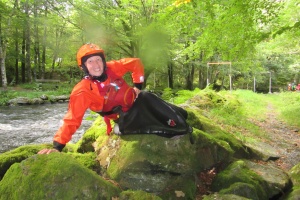 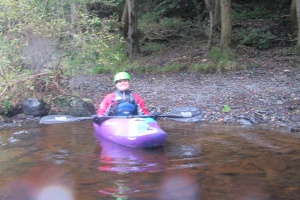 After a quick shuttle back to the top and some lunch, Lou Double Decker(*) Wiggins and Shep's request for a nap were mistaken for cries of having had enough, but we were simply digesting and keen to crack on! After launching down the slide at the Upper, we did a quick warm up by the Chipper, then a little eddy hopping through The Bit Above The Graveyard, then Graveyard itself, Ski Jump, Wave & Fingers under Mrs Davies Bridge, down through NRA Bridge and Chapel falls. Admittedly there may have been one or two rolls and swims between us but some of this was totally new to at least one and good to get the whole river done! Result.... and well worth some beer......so... 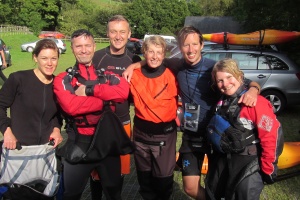 Off to the specialist beer shop in Bala en route back to the bunkhouse at Betws-y-Coed. A couple pints in the bunkhouse bar before dinner uptown at the Pont-y-Pair (good steak!). A quick obligatory look over the bridge at the Lugwgy and we've never seen it so low. With smiles all round, we headed back as most were knackered .... but Phil & Shep hadn't had enough so went back out for more booze. hehehe

Sunday weather wasn't looking great as we were "promised" lots of rain throughout the morning. After another great cooked brekkie at the bunkhouse (def stay here again) we packed up and headed to the Dee. Nearly at the put in, Lou realized she'd left some essential kit back at the bunkhouse and without hesitation trip leaders send us back to get it - there'd still be water when we got back!

The Dee was low, as could be seen with the usual wave train in front of the hotel almost non existent but the surf wave was still there and just as tricky to get into. On down to inspect Serpent's Tail, which we all ran with no issues. Down again to Town Falls which was .... mostly ok, but all progress and deffo all smiles. 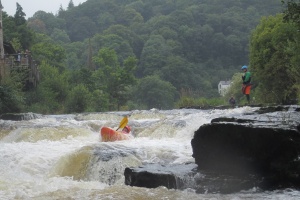 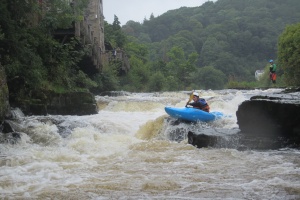 Martine "Rocking it" at Town Falls 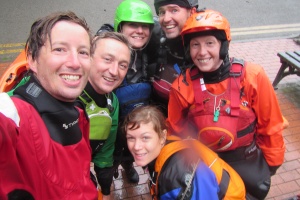