The Small Isles consist of the island jewels of Eigg, Rum, Muck and Canna and lie to the south of Skye.

We traveled to Scotland at the start of the May Bank Holiday and found that the unusually warm weather had encouraged significant competition for the available campsites. We eventually found three flat spaces near the foreshore outside of Arisaig and awoke to a beautiful morning, a wonderful view towards Eigg and an infestation of the dreaded Highland midge. Luckily our paddling days were insect free and our only other real encounter with Culicoides Impunctatus came on our return to the mainland when bottles of Skye Red beer were supped through midge head nets. A difficult but necessary task as this has been the worst year in memory for the pesky little blighters.

With kayaks packed with food and water for a week’s paddling we explored the skerries in Loch nan Ceall before taking the northern passage towards Eigg which lies 15 NMs from the mainland at Arisaig. 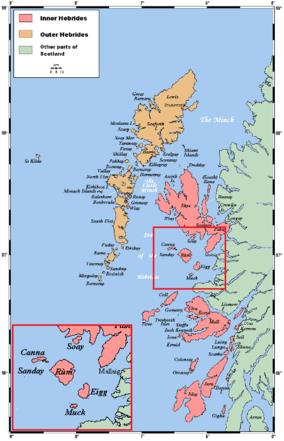 Weather and sea conditions were perfect and the north east coast of Eigg was reached in quick time before, after a rocky landing for lunch, we continued our journey around the northern tip of the island and arrived in surf at The Singing Sands. This is a wonderful beach which would not be out of place in the Caribbean but its name is somewhat misleading because it squeaks rather than sings as you walk along it. We set up camp and a meal was concocted, or perhaps invented, on a driftwood fire: Chorizo curry followed by fruit cake with custard and washed down with copious amounts of Sainsbury’s finest bladdered red wine [I think there’s a pun in there somewhere!] whilst reflecting on the several porpoises we had encountered during our day’s paddle. 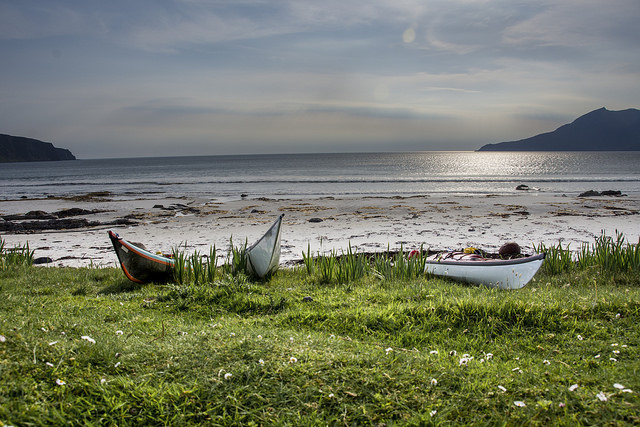 The Singing Sands on Eigg

The next day we left for Muck with the intention of returning that evening to The Singing Sands. Not having to break camp and repack the boats was a bonus and we made the most of the south flowing stream to paddle along the exposed western coast and then cross the Sound of Eigg to Muck. To save time we carried our kayaks across a natural causeway, revealed at low tide, between the main island and a smaller one off the northeast coast. The large, uneven and slippery rocks made this a difficult task but the short cut allowed us some extra time to relax and replenish our drink supplies in Port Mor before exploiting the north flowing tidal stream for our homeward journey. Returning to Eigg we found that a group of kayakers from a club in North Staffs, along with two solo paddlers, had pitched their tents on our singing beach but this was the only time on our island hopping travels that we shared camping with others. 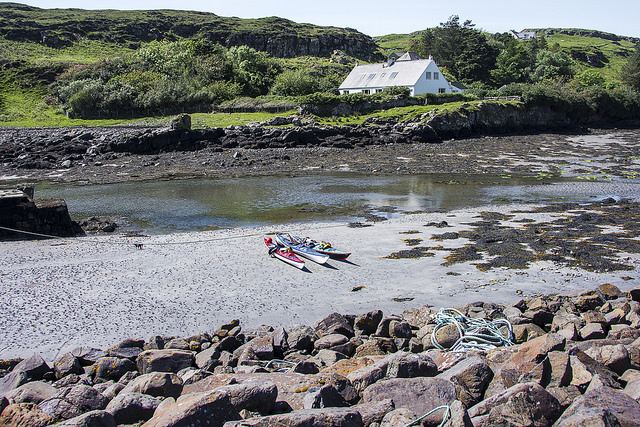 Low tide in the harbour at Port Mor on Muck

On our third day of paddling we made the 5 nautical mile crossing to Dibidil in the south of Rum before kayaking a similar distance to Harris which lies midway along the sheer cliffs that form the western coastline. The timing of the favourable tidal flows meant this was a short paddling day but the camping at Harris proved a wonderful compensation. We shared our temporary home with deer and horses and luxuriated in a natural bathing pool formed at the base of a picture postcard stream just before it meets the sea. Harris is particularly noted for the mausoleum built in the style of a Greek temple by Sir George Bullough of Kinloch Castle. It looked forlornly out to sea from the headland immediately to the right of our campsite whilst guarding four tombs. 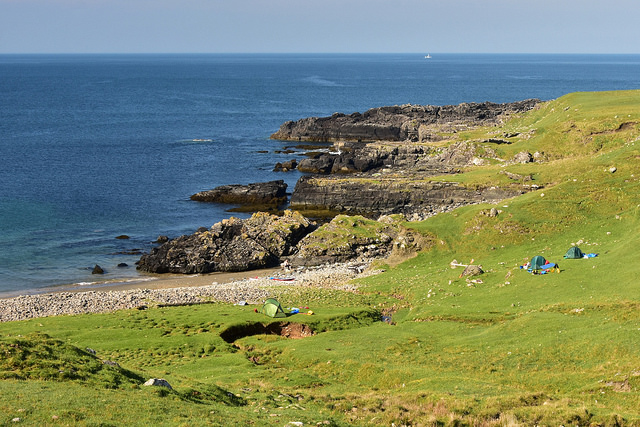 Camping at Harris on Rum

The next day, and again a late start to account for tidal flows, we headed for the western cape at Camas na h-Atha and then paddled across the Sound of Canna to the southern coast of Sanday before eventually finding a beach on which to land at Haslam near Tarbert Bay on Canna. This journey was potentially a very challenging one, as evidenced by the naming of Wreck Bay along the rugged western coast of Rum, but the sea conditions were benign and the weather continued to be more Mediterranean in high summer than Scotland in late May.

In the evening we tramped a couple of miles to the small village on Canna in search of a pub although initially this was much more in hope than expectation because a PH was not marked on our OS map. But the further we walked, and the thirstier we became, the more we were convinced that an unlimited supply of Skye Red and Skye Black lay just around the corner. Fortunately this rather bizarre behaviour ended just short of collective hysteria when Andy Nutter noted, and became fascinated by, the enlarged genitalia of a prize Scottish bull that was tethered in a field close to the road. We came to our senses at this point and began our return journey with the conversation taking a downward turn. 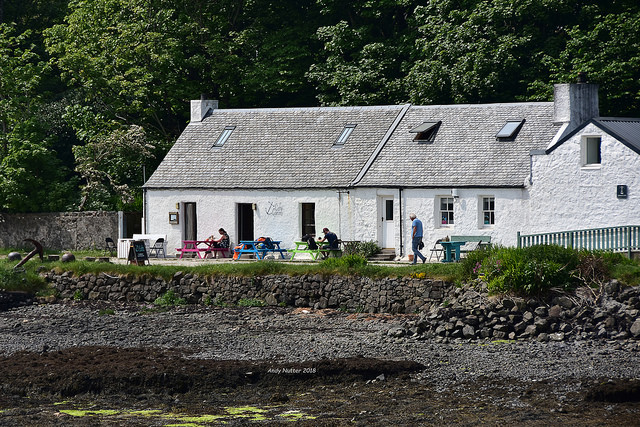 The next day we headed to Garrisdale Point at the extreme west of Canna and waited for the predicted change in the tidal flow that would support our circumnavigation of the island. It was during this period that we encountered the first of the three sea eagles that we saw on our journey. Then, fed and watered, we paddled along the northern coast, ignoring the eerie wailing sounds of a colony of seals on the rocks at Sgeir nan Sgarbh, until we entered the dominium of nesting birds along the sheer cliffs either side of the bay at Stoc a Ghallubhaich. Without doubt the puffins stole the show: flying past us in their scores like windup, mechanical birds with little wings rapidly flapping as they searched for small fish further out at sea. 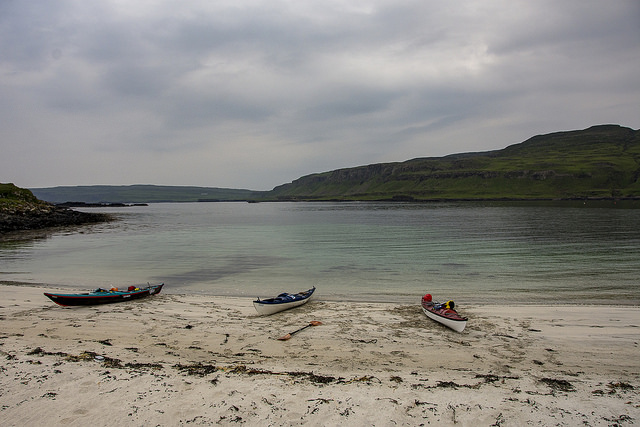 In the late afternoon we passed the ruined castle at Rubha Carr-innis and entered Canna Harbour before passing under the bridge that connects the main island to the smaller one of Sanday and then landing at the beautiful beach shown in the photograph above. After setting up camp and eating dinner-an Andy Geen inspired hotpot followed by ginger cake and custard- we retired to the Canna Café and finally imbibed the elusive selection of Skye beers.

On our final morning in the Small Isles we packed our boats for the last time and then paddled to the pier that lies on the north side of Canna Harbour. We had a few hours to wait until the ferry arrived to take us to Mallaig on the mainland and so we ate a late breakfast in burning sunshine al fresco at Canna Café in the company of a couple of Dutch yachtsmen and then explored the grounds of Canna House [currently being renovated by the National Trust who own the island].

The ferry journey allowed a couple more sightings of porpoises before our disembarkation at Mallaig which required considerable effort given that the kayaks were still packed with kit and we had little time before the boat left for Skye. We then had the logistical problem of retrieving the two cars that had been left at Arisaig but this was solved by Andys Nutter and Geen hiring a taxi and the residual Andy waiting with the kayaks at the dockside. Finally, after a fish and chip supper, we drove to a wild camping spot along the coast from Arisaig and although we were tormented by midges nothing could detract from a memorable adventure in The Small Isles of Scotland.