Derek, Matt Altin and I (Paul Carter) had grand whitewater paddling plans for this long weekend, however last minute drop outs meant we went sea kayaking in Anglesey instead. Derek and I had never been sea kayaking anywhere other than the basin so the fact that the wind didn't drop below force 4 at all for the whole 4 days made for a steep learning curve! 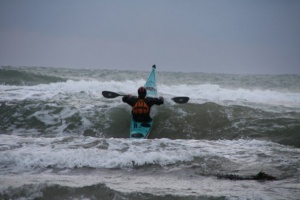 Derek, before he got too warm and took a dip

A leisurely start waiting for the tides meant we got on the Menai Straits at about lunch time. I quick recap from Matt reminding us to lean the wrong way in order to turn the buses and we were off to the Swellies. This is a tidal race that rushes over rocky outcrops between Anglesey and mainland Wales. With the tide flowing past at 8 knots it was like a 300m wide river with no eddies, but due to the gales and driving rain the waves didn't pick up as high as we hoped so we headed to Porth Dafarch to have a surf. It's not easy getting a sea kayak out through massive breakers in a force 6, and after Derek had a brief 'out of boat' experience and Matt had several rolls, I decided that the condition were a little sporting and hovered just inshore of the worst of it.

We then headed back to the hostel and ate quite possibly the worst Chinese ever! 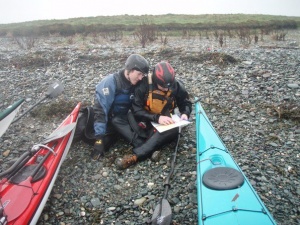 Wishing we could navigate to somewhere less windy

Penhryn Mawr is a tidal race described by Matt as Hurley on about 20 Gates, unfortunately we mis-timed it slightly so as the wind picked up we headed to Harry's Furloug (headland near a massive nuclear power station). The waves were messy, but fun - Matt showed an element of concern when we found ourselves drifting out to Ireland, but a bit of hard paddling later we landed on a beach and did some navigation practice. The weather really was pants...

Saturday - Attempt 2 at Penhryn Mawr and Surfing at Trearddur Bay

For the second day runing the weather was too mental to get to Penhryn Mawr and as all the whitewater rivers in the country were running we tried but failed to hire any whitewater boats. After ruling out the option of paddling the Trweryn in sea kayaks we headed to Trearddur Bay for a surf. The weather brigthend up after a couple of hours and the swell really picked up. We surfed for about 4 hours getting better with every ride. The main memory for me was paddling out over an enormous wave, paddling up, and up and up, before the whole kayak left the water and crashed down on the other side!

Matt then took us on some hairy rock hopping amongst some crashing waves before running through a few rescue, swimming skills to round off the day.

Dry Suits apparently increase bouyancy so I took no chances

Finally after a 7am start we managed to get to Penhryn Mawr. It was only a force 4 so as good as still compared to the last few days, and we cut many a fine shape surfing the side shoot and then the main race off Holy Island. It really was amazing, waves as big as an Austrian river, but never ending. You really do fly as you surf down the face of the bigger sets. We then rounded the weekend off by rock hopping our way back to the beach for the long drive home.