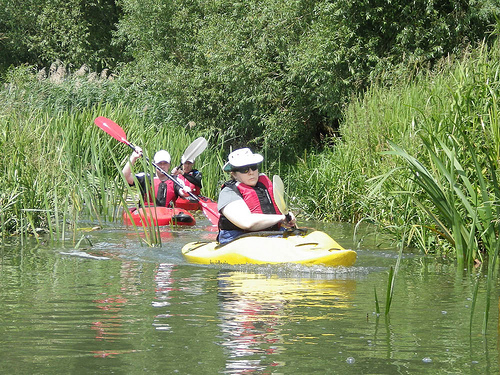 Four paddlers, a few working on their 2 star, decided to take a paddle on the Thames up near Oxford.

After an hour’s drive, we parked up and put in at a usual put-in place at Wolvercote Common which is to the side of a branch of the river, and paddled down to join the Thames proper.

We paddled passed the Common, enjoying the spectacle of the wild horses down by the river’s edge. Stopping to adjust and fiddle with the boats as we went, til we got to ‘Four Rivers’. Here we decided explore a little and took the west branch up towards Hinksley Stream

Portaging past ‘Tumbling Bay’ swimming place, we put back in and decided to find and paddle upstream the back-water leading to Hinksley stream. The water wasn’t too swift so we weren’t turned off our line that often.

We turned right down Hinksley Stream, which competed with the Stour for most reed filled section of river ever. But we pushed through and got to clearer water. And then had clear paddling only intercepted by some river works that we needed to portage over.

Taking a left turn, we turned into up Bulstake Stream. that led back to the Thames and then realising we were running late, we had a quick lunch at Osney Lock and paddled back up to the car park at Wolvercote