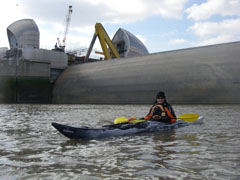 On a cold but bright Saturday morning we met to paddle out to the Thames Barrier. Looking at the tides (low tide at midday) we didn’t have to get up too early, and after getting to the basin just after 9 we were on the water just after 10 am.

Though the weather forcast said there wasn’t much wind, the initial crossing and the next five minutes were hard work against the wind, but it soon settled down and with a break at Greenwich we reached the barrier just after 12 midday. The wind was in our faces again as we paddled through one of the centre gates of the barrier, so a little focus was needed, though Pete was way in front as usual. We were soon through and ready to explore. 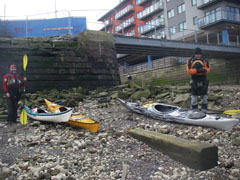 We decided to push on a little to look for the near mythical get out that Mike had once mentioned to Dan. Though spotting a potential spot just after the barrier behind a boat pier we pushed on til we got to the Woolwich Free Ferry at 12:30. Though the beach didn’t look attractive, there was an easy out and no mud. The sun even came out for a little while to join us. 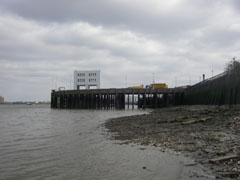 The tide turned pretty damn quick and was rising noticeably by 1pm so we got back on – we flew back with the tide and a little help from the wind and were back at the basin for 2:45pm, a little earlier than planned, with at least one of us wished we’d gone a little further and explored as far as Barking Creek. We certainly prooved that 16 miles is a little easier with the tide helping you along and a break for lunch.

You can see a few photos here