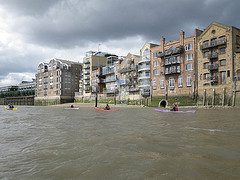 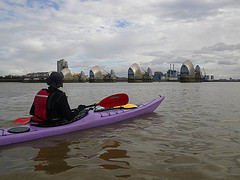 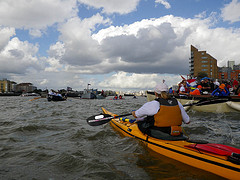 A trip to the Thames Barrier was organised on Saturday 17th September 2011.

The plan was to use the low tide at North Woolwich at 11:06hrs to help carry us downstream and use the tide to bring us back. The group including Dan (Leader), Sarah W, Pete, Tash, Natalie, Dimitris, Joanna and Neil were to meet at the basin for 09:00hrs. We were on the water ready for 09:20hrs. The weather was mild, with sunny spells. The was no need for cags to be worn. The main challenge was the wind. The wind was blowing in gusts of around 10mph. We then crossed the fairway and made our way towards the Barrier. There is a large slipway approximately 300 metres short of the Woolwich ferry terminal this was our lunchtime target.

With favourable conditions we arrived at the Barrier around 11:30hrs. There was some assistance from a PLA RIB as we had radio problems at the Barrier. We all made it through safely and stopped for lunch shortly afterwards. There were discussions on paddling further toward Thamesmead, however as we were not sure of any safe place to stop downstream we kept to the Woolwich slipway plan.

The slipway was large enough for all the kayaks to land safely and for them to be lifted up away from the river. We had lunch and crossed the fairway just after noon and headed back towards Shadwell. Although the tide was starting to help carry us upstream. We went through the Barrier paddling against the wind. The wind dropped as we moved closer to the beach that borders Thames Barrier Park.

As we made our may back we had to pick our route carefully through all the boats assembled for the start of the Great River Race. The race was to start at Millwall Dock at 13:40hrs and finish some hours later further up the river outside Ham House in Richmond. We were aware of the race (www.greatriverrace.co.uk) and had spoken to the PLA the day before and they were happy for us to use the river. The boats were mainly large rowing boats, with a number of crews not wearing any PDFs. We got back to the beach near to the Basin at 13:40hrs, just as the Great River Race was starting. When we were putting our kit away we witnessed a number of boat head up stream against the wind.

In terms of distance the journey was measured on Google Earth as being 13.6 Nautical Miles. The timings were going 2hrs 20 minutes to Woolwich Slipway and 1hr 45 minutes back. Therefore on a journey that was four hours over 13.6 Nm we paddled at an average 3.4Knots.

Overall an enjoyable trip was had by all!

Other photos from Dan