The river Wye, Symonds Yat, August 2009 White Water for all the family

You may ask why we decided to paddle the river Wye, well I have a young family and wanted to introduce them to white water gradually. The trip consisted of me, my wife Ros (she’d paddled a kayak at least twice), my eldest son James (7 years old and not far off rolling) and my second son Robin (5 years old, he shot his first weir at the age of 4!). With grandparents living near by my youngest William, 2 years old, was packed off with them each day, they also provided a very useful shuttle.

Armed with the “Canoeists’ guide to the River Wye” and river play boats (try and make grade II fun.) we set out to explore the English Welsh border.

Following the guide book we inadvertently ended up at the Ross on Wye Rowing club, after asking “Where’s the best place to launch a canoe?” and being told “On a river” they kindly let us launch from their steps. The river was slow and meandering with lovely scenery including ruined castles, obviously to a five year old this is boring so after two minutes on the river Robin threw his paddle away and declared he wanted to go back to the car. Pointing out the car was now parked over 8 miles down stream did not really help, what did help was the promised of copious amounts of chocolate and coca cola I had stock piled in my boat for supplies. He then bounced from one sugar high to another for 8 miles. There were other distractions that made him happy: splashing his brother (although that generally ended in tears) and white water! There were a few patches on stretch where the river shallowed and the waves grew, one notable place was just after Kerne Bridge on a sweeping left hand bend. A group of open boaters had just over taken us, we watched as a couple were pushed into the brambles on the outside of the bend by the fast water. The kids then overtook them and demonstrate how the river should be run with near on perfect river placement and direction of power!

The exit at Lower Lydbrook was quite obvious, the only shock was to walk up the bank to find a different car park to the one I parked in! Luckily the other car park was only a short walk away.

It seemed appropriate to take my wife down her first set of rapids on our thirteenth wedding anniversary. The newly rebuilt rapids at Symonds Yat were far better than I expected, with a couple of small drops and standing waves it was a little bit of excitement for all. We ran the rapids one at a time, with me breaking into an eddie halfway down on safety. The run went exactly to plan, everyone lent forward and paddled down the tongue of the rapids without incident. The kids were eager to do it again, but knowing we had another 6 miles of paddling we pushed on.

A little further we came across a smaller section of rapids. Time for a quick bit of teaching: breaking out of eddies (near the top), stern squeeze and then breaking into another eddie on the other side. After a couple of demonstrations James went first. He broke into the flow very well, sped across the river to the opposite eddie and then just stopped and then flipped over (possibly I should have told him about eddie fences, oops, that’ll be self discovery learning). We quickly got him back in his boat totally un-phased, explained to him about eddie fences. Then went back to Ros and Robin and repeated the advice. Robin, with the knowledge of what happens if you stop paddling, attacked the river and finished by paddling hard across the eddie line, I think mainly just to show his older brother how it should be done.

The river continued to meander with the very occasional bit of fast moving water, but nothing to write home about. Despite the beautiful scenery the kids quickly got bored and even with impromptu water fights and chocolate we still had tantrums and Robin announced “I hate kayaking, I only like rapids!” For the rest of the journey the children swung between happy joyful kids having water fights, and grumpy children that just wanted to be towed. Possibly the sugar highs and lows of coke and chocolate are more pronounced in children. We eventually got to the steps at Monmouth and loaded up.

We had a couple of days rest and reflection on our previous journeys and decided to introduce our children to a full English Breakfast before the paddle and cereal bars and water during it with regular towing sessions to give them a rest without slowing us down too much. It worked we had happy children for the whole journey.

The day started at Symonds Yat. We decided to spend a lot of time on skills at the main rapids, everyone could run the rapids, but could they break into eddies halfway down? James followed me aiming to break into the first eddie on the left after the drop. He paddled into the eddie finishing with a stern rudder, but instead of continuing forward as he expected into the eddie he went backwards over the next drop and flipped. I chased him down then carried his boat back to the eddie we should have been in. Robin was next, he broke into an eddie on the other side quite confidently. Ros was next, she was finding the riot glide a bit of a tippy boat so decided to find an eddie halfway down and became the trip photographer. We then spent about an hour playing eddie hopping, I was very pleased with the kids: James attempted some difficult sections (went over once more, but came out happy trying to surf his boat upside down for the rest of the rapids). Robin seems to have boundless energy, on one occasion I thought he had missed the eddie but he just paddled and paddled against the current till he was in it.

Near the end of the session, at the bottom of the rapids, Ros pointed out that she had overheard Robin say to James “I’m better than you, you’ve capsized three times, and I’ve not capsized.” I decided Robin needed some experience of defensive swimming in rapids. So walked him up to the top and threw him in, during the walk up a few onlookers kept looking at my wife as if to say “You’re not going let him throw that small child into the rapids”. I accompanied Robin down the rapids, you can see the journey on youtube.

After that we reclaimed our boats and paddled to Monmouth, again the scenery was pretty, but this time we had happy children not bouncing between sugar rushes. The only incident we had was when I saw some fast moving water near a bank we all paddled for it, went fast for a while but then it became very shallow and we all got grounded. In the end I had to get out of my boat, holding onto it with a sling, and then drag everyone to deeper water.

That was our last day paddling the Wye, we lost one day of planned paddling due to high winds, but I think the kids benefitted from an extra rest day and we finished the last day on a high.

This was not a high adrenalin charged white water trip but it was an excellent opportunity to introduce the children to white water and practice my leadership skills, CLAP, in a safe environment.

The trip in pictures 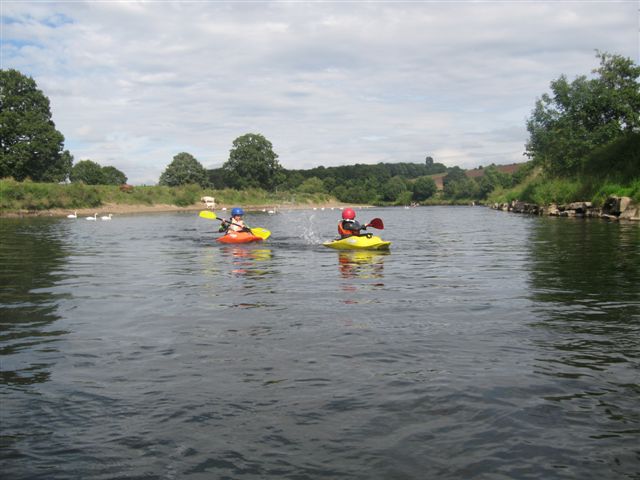 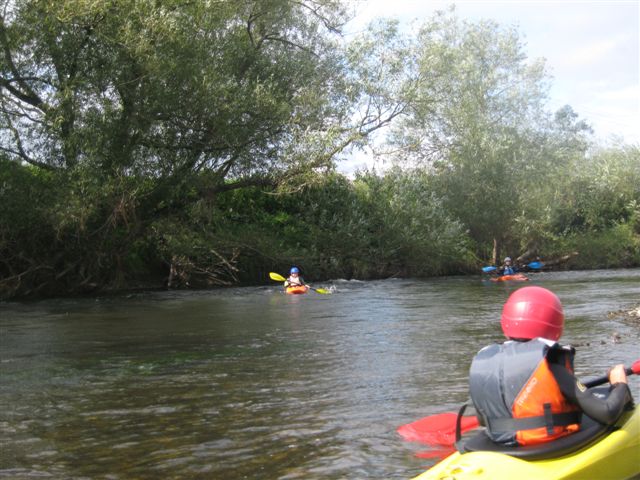 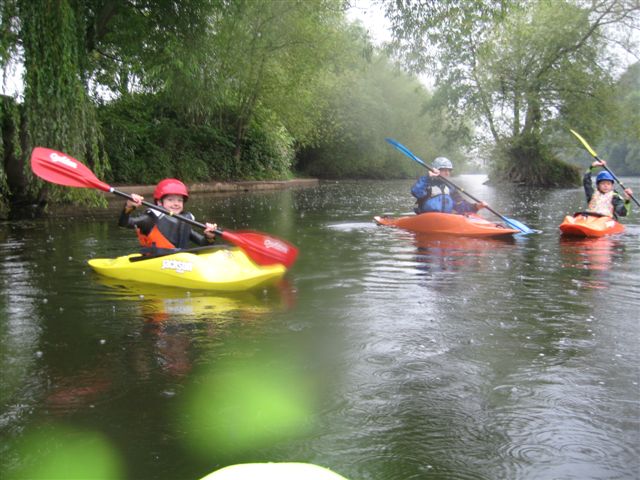 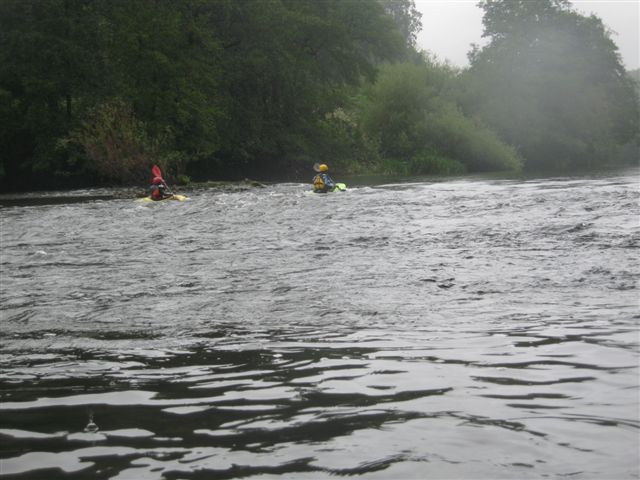 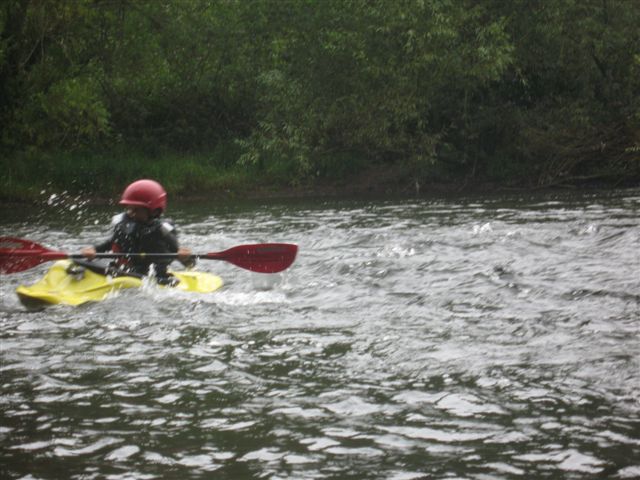 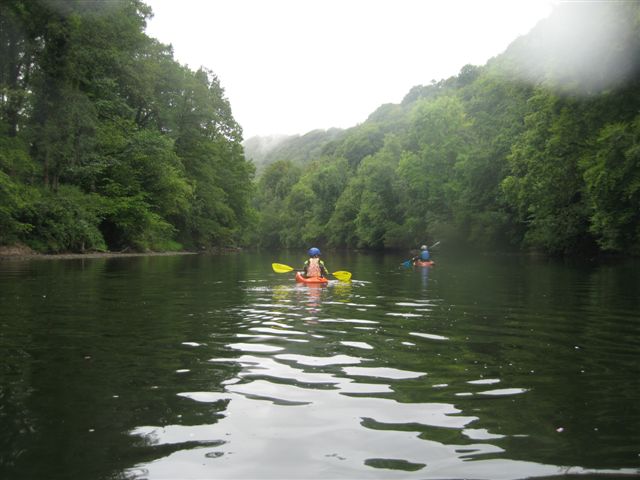 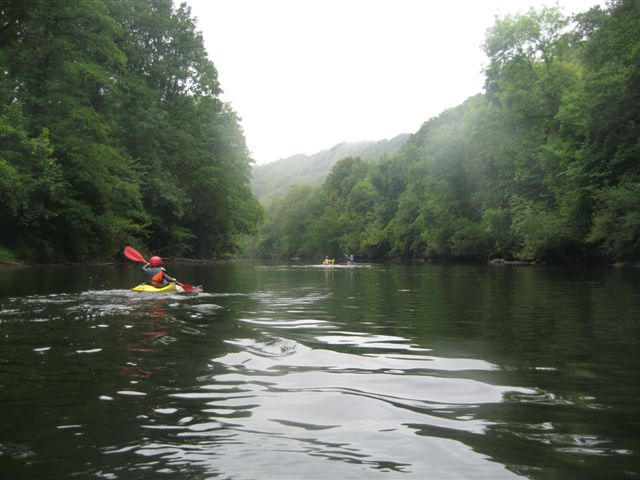 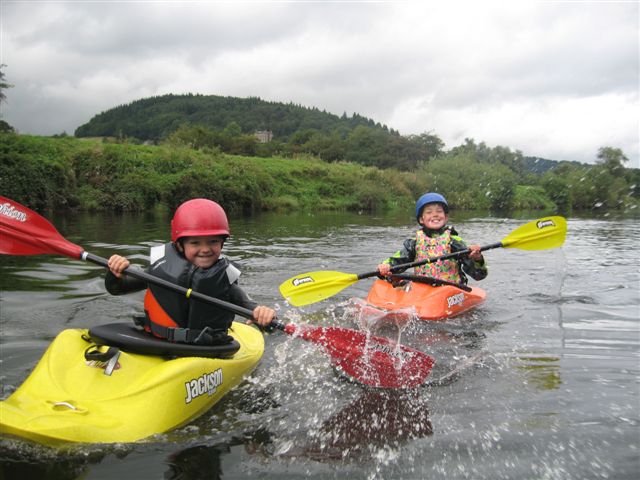 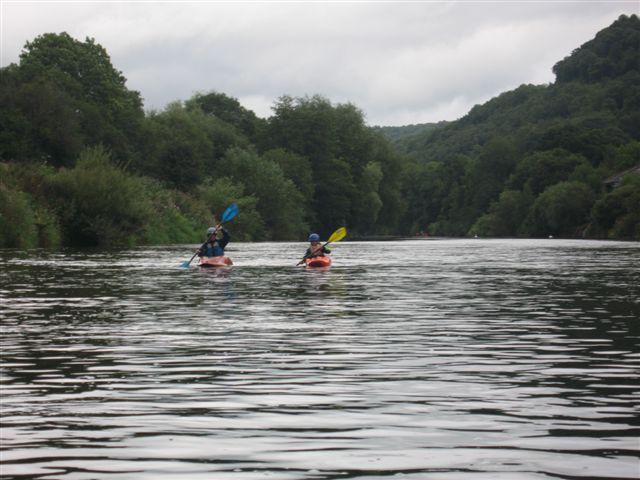 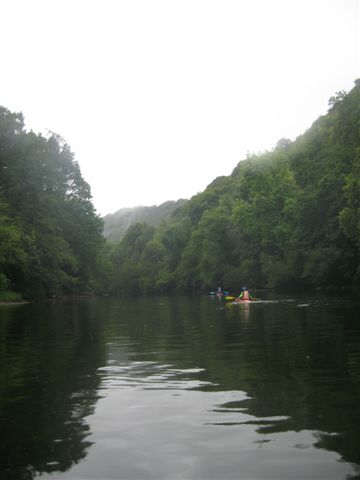 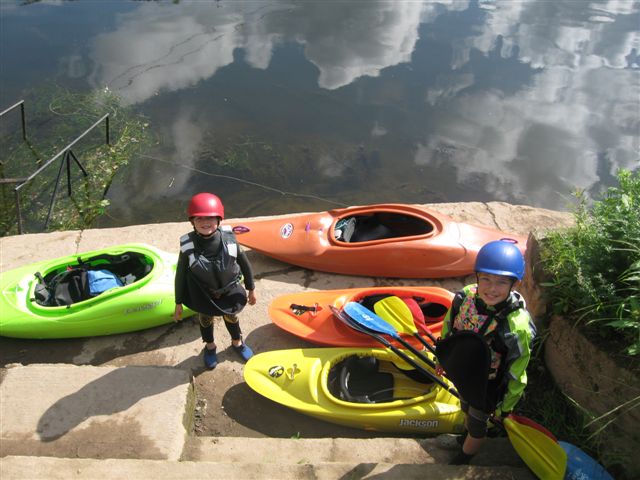 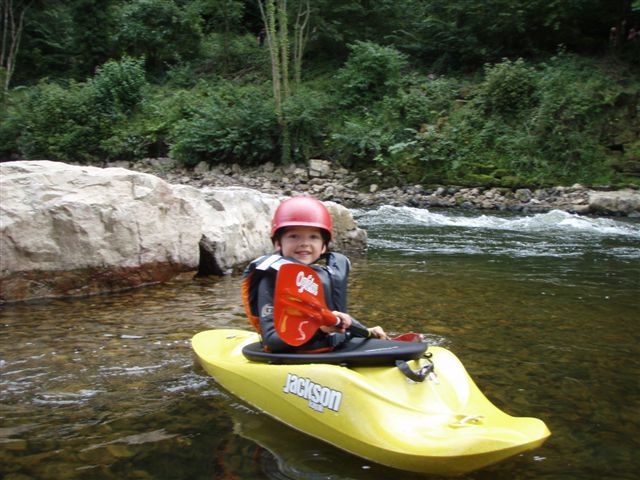 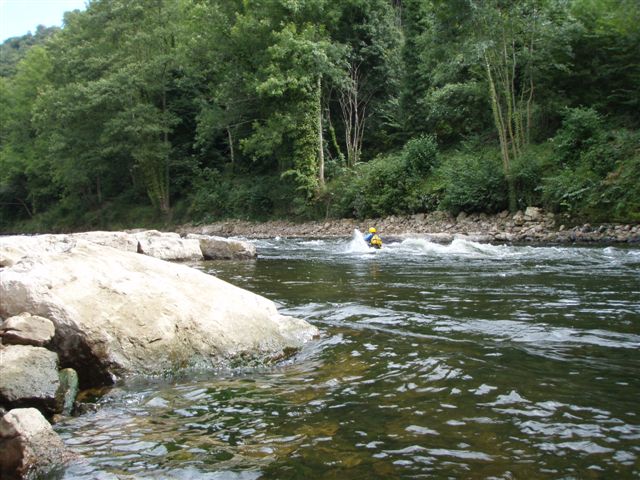 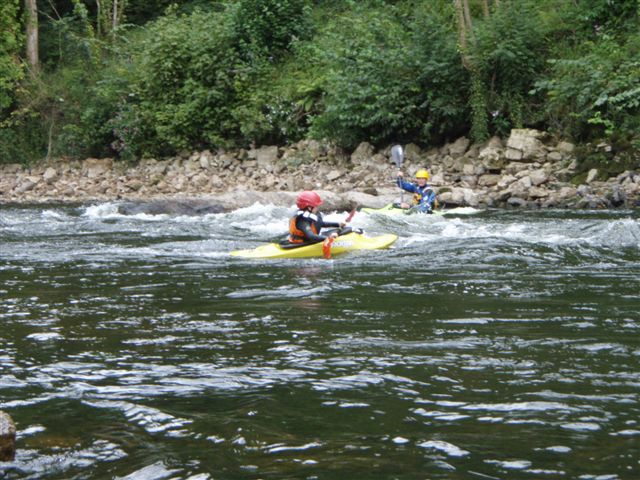 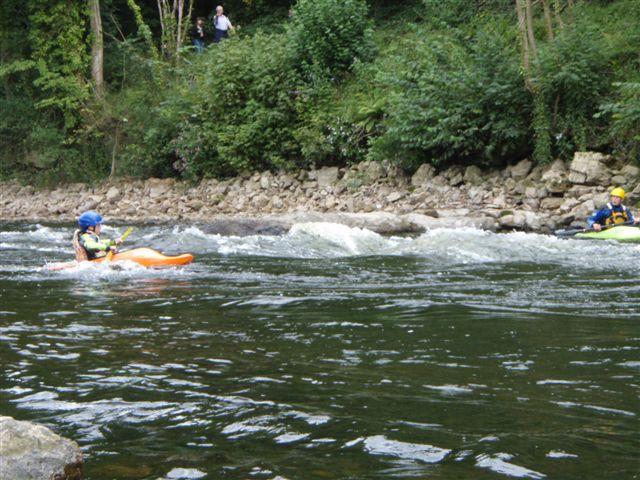 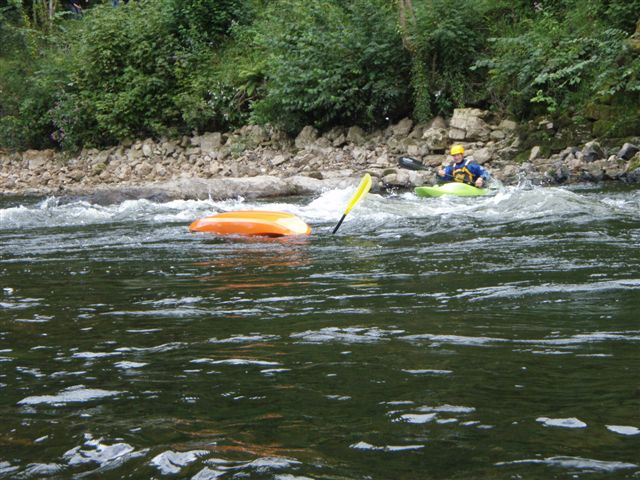 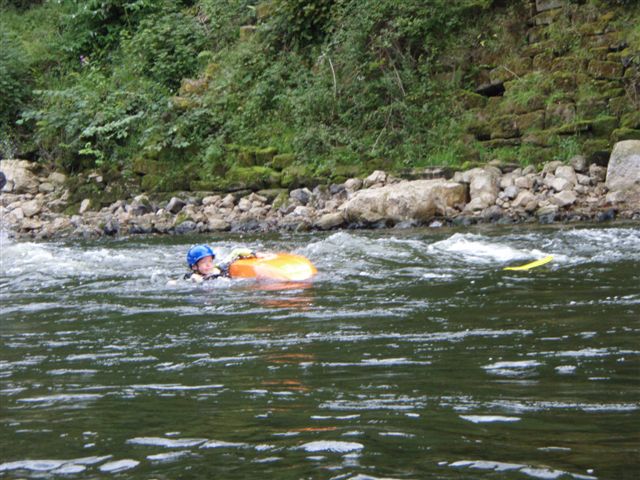 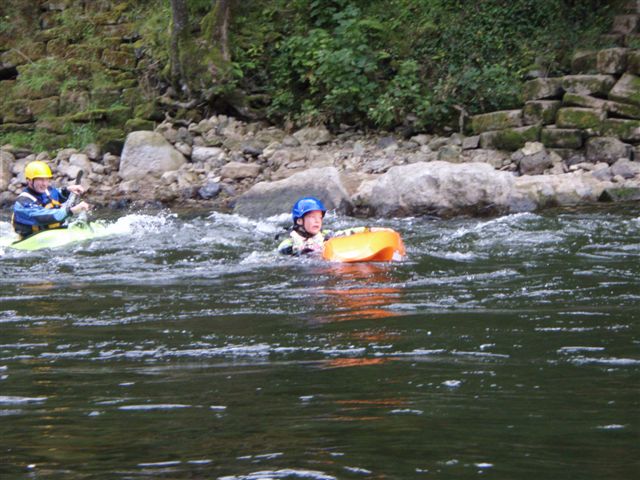 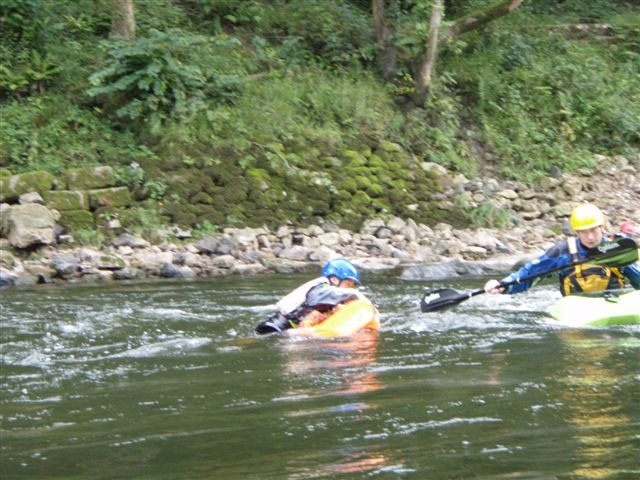 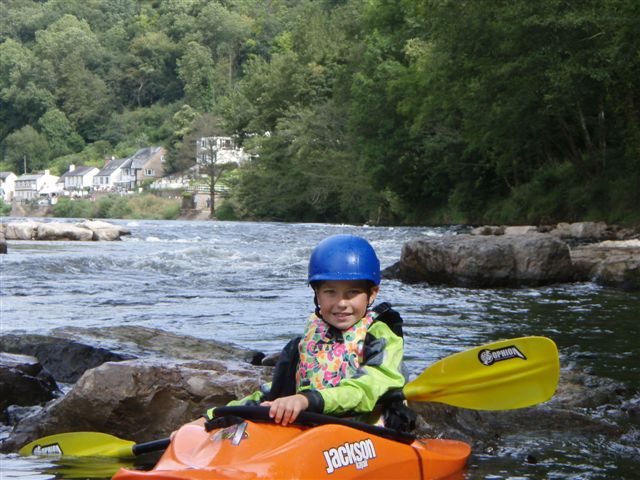 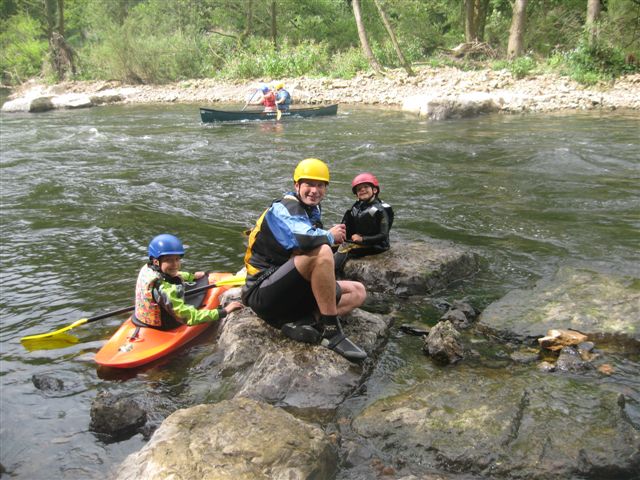 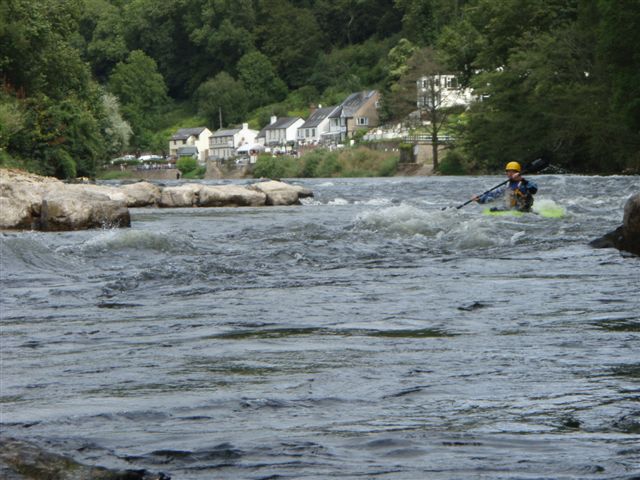 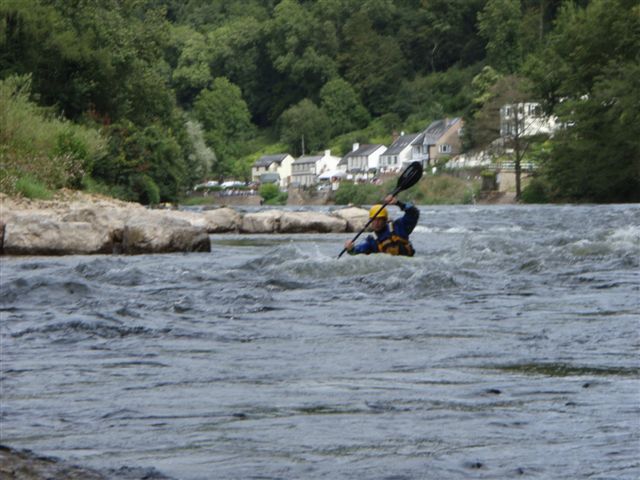 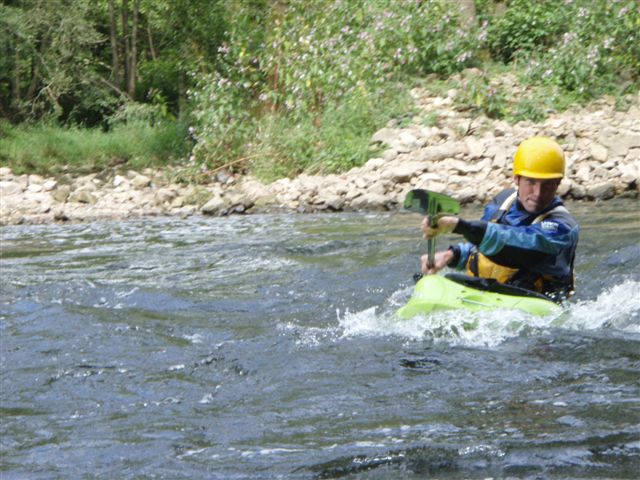 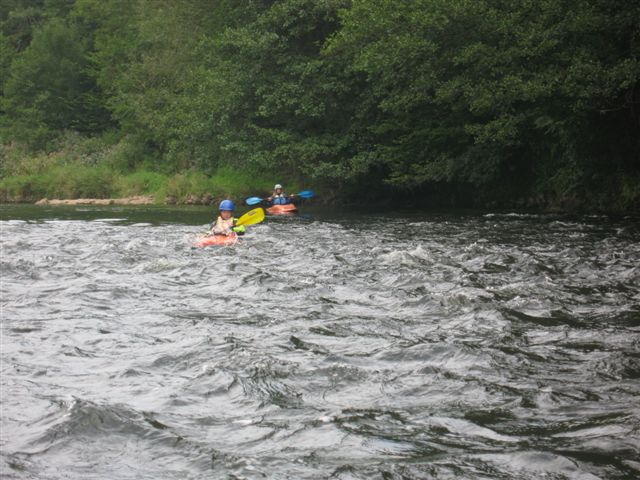 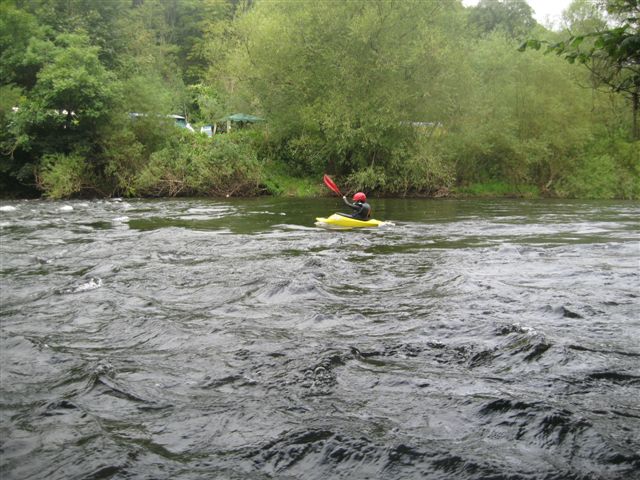 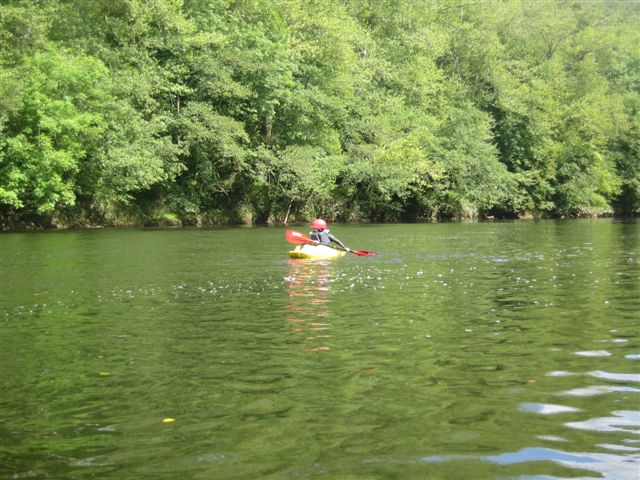