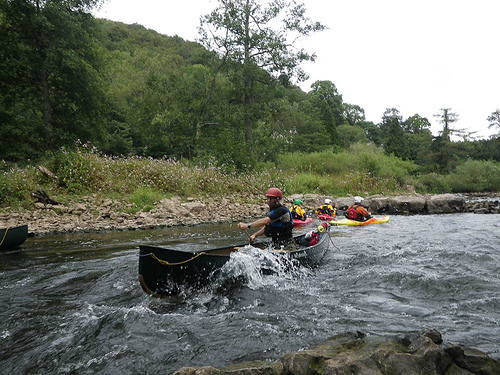 Four of us travelled up to the Wye to do some open-boat paddling: a mix of flat water touring and some white water training. Owen drove up with his boat, the rest of us hired boats there, as the likely scrapey conditions wouldn’t suit our soft bottomed Pakboat.

We were dropped off on the outskirts of Ross, we were travelling with a couple of large groups – a set of dragon boaters out for the day, and a party group, it seemed.

The Wye here is mostly flat slow flowing water, with the occasional baby rapid at bends - its very scenic and pretty with lots of birds along the edges and the number of fishermen suggesting good fish stocks also.

Lunch was taken at Kerne Bridge, where we tied the boats up and sat and watched the chaos of many groups preparing for their afternoon on the water

Sarah demonstrated how to properly eat a TimTam whilst canoeing, and we practiced some towing towards the end of the day.

We camp cooked that evening with the menu offering freshly made risotto, pasta, and some instant meals in plastic packets which were better than they should have been, and the night was rounded off by a pint or two in The Saracens Head, a minutes walk from the camp site.

For our second day on the Wye, we organised some moving water coaching from WyeDean, handily the guys we were camping with. Our coach Pod put us through our paces on flat water & got us to practice a few new moves and then took us down to Symonds Yat rapid, we spent the next 2 hours working our way up and down the rapid, breaking in and out, aiming at eddies and ferrying our way back to near the top. As the day went on the rapid got busier and busier - towards the end it was hard to get onto the wave to try a surf. Next time I’d plan to start paddling early, so we got most of the time on the water before the crowds turn up

Once off the water we headed again to The Saracens Head for lunch before the drive home.