On the 20th march, 8 THCC paddlers working on their Two Star award drove north to Hertford in search of some fun water to paddle.

We paddled on the Lea from Hertford, down the river and back up the canal, having lunch near New Gauge House. We played on a weir on the way there and slid down one on the way back - though Dan promised no portages there was one, allowing everyone to demonstrate seal launches, and, ahem, rescues. 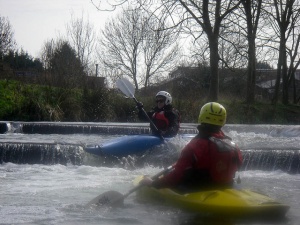